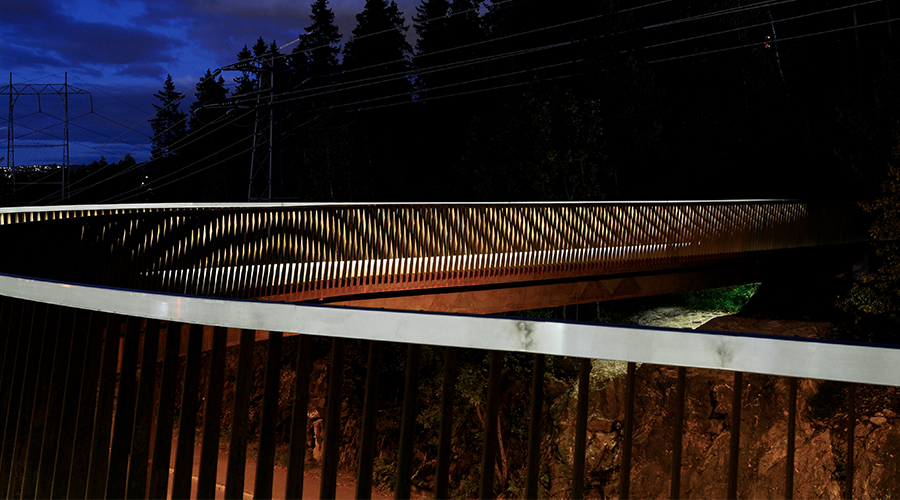 The winner of the Norwegian Steel Construction Awards 2017. The bridge was also a finalist for the World Architecture News Best Bridge Award 2017, and one of three finalists for the Oslo City Architecture Award 2018.

Degree of Freedom, in collaboration with Saaha and Landskapsfabrikken (now Asplan Viak), designed a new pedestrian bridge crossing the Ytre Ringvei for the City of Oslo. The bridge is part of the pedestrian and cycle route between residential areas and the forest east of Oslo (Østmarka).

The pedestrian bridge crossing the Ytre Ringvei is an 80-meter-long continuous steel box girder structure with four spans, the longest being 22m. The bridge has an asymmetric cross section formed to optimize the structural performance. In plan view the bridge resembles a boomerang and is shaped to follow the serpentine line of the approaching paths, avoiding trees and other natural obstacles on its way through the forest. Supported on concrete abutments clad with local natural stone, and midspan with three slender steel columns. With a cross section depth of 0.85m and a maximum span of 22m, the depth to span ratio is just 1/26.

The structure of the bridge is made of weathering steel. Weathering steel, best-known under the trademark COR-TEN steel, is a group of steel alloys which were developed to eliminate the need for painting and to form a stable rust-like appearance when exposed to the open air.

Bridge design and structural engineering during all design stages. Technical assistance during fabrication and construction, and steel inspection.

Photos: Are Carlsen
We use cookies on our website to give you the most relevant experience by remembering your preferences and repeat visits. By clicking “Accept All”, you consent to the use of ALL the cookies. However, you may visit "Cookie Settings" to provide a controlled consent.
Cookie SettingsAccept All
Manage consent